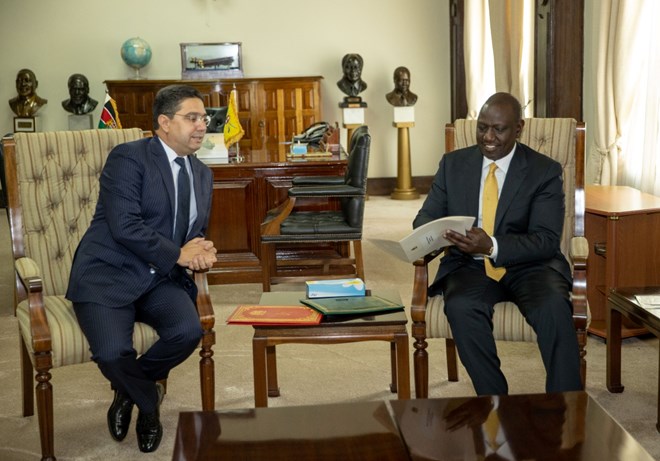 Wednesday’s break came barely a day after the leader of the Polisario movement, Brahim Ghali, attended the swearing-in ceremony of Ruto as president in Nairobi.

“Kenya rescinds its recognition of the SADR [Sahrawi Arab Democratic Republic] and initiates steps to wind down the entity’s presence in the country,” Ruto said on Twitter after meeting Moroccan Foreign Minister Nasser Bourita.

The president deleted his tweet after Kenyans on social media reacted strongly to the announcement.

The Algerian-backed Polisario Front wants an independent state in Western Sahara, a vast stretch of mineral-rich desert that Morocco claims as part of its own territory.

Bourita had delivered a congratulatory message from Morocco’s King Mohammed VI, Ruto said, adding that the two nations had agreed on improved ties “in areas of trade, agriculture, health, tourism, energy, among others”.

“Kenya supports the United Nations framework as the exclusive mechanism to find a lasting solution to the dispute,” Ruto said.

A former Spanish colony, Western Sahara sits on the western edge of the vast eponymous desert, stretching along the Atlantic coast.

When Spain withdrew in 1975, Morocco sent thousands of people across the border and claimed it was an integral part of its territory.

The following year the Polisario Front declared a republic, with support from Algeria and Libya, and demanded a referendum on self-determination. Since then, 84 UN member states have recognised it.

But a stalemate ensued, and Morocco built razor-wire-topped concentric sand walls in the desert that still ring 80 percent of the territory that it controls.

Under a 1991 ceasefire, the UN, which considers the Western Sahara “a non-self-governing territory”, deployed a peacekeeping mission.

The international community has long backed a referendum to be held to decide the territory’s status. But Morocco rejects any vote in which independence is an option, arguing that only granting autonomy is on the table for the sake of regional security.

Last month King Mohammed demanded in a speech that Morocco’s allies “clarify” their stances on the issue, calling it “the prism through which Morocco views its international environment”.

The African Union recognises the Polisario-controlled region as a member.