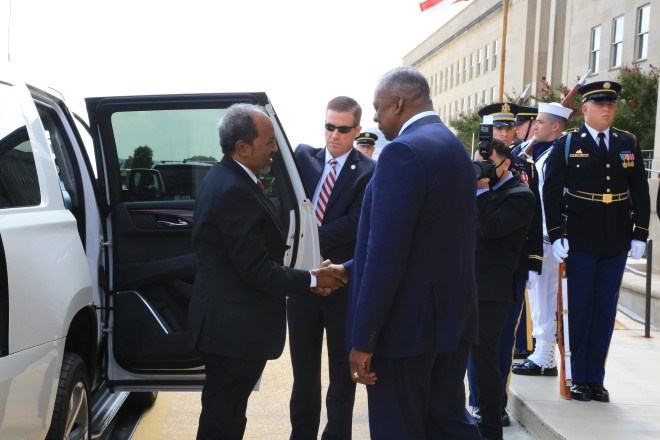 US Secretary of Defense Lloyd Austin welcomed Somali President Hassan Sheikh Mohamud to the Pentagon on Thursday for an enhanced honour cordon and bilateral meeting.

“We thank the US Secretary of Defense Lloyd James Austin for the visit and the meetings. The peace and stability of Somalia are the foundation for the peace of the region and the world. We are grateful for the US commitment to fighting against terrorism.”

Security experts say that the meeting likely focused on strengthening the capacity of Somalia’s military to battle Al Shabaab, which US generals have described as Al Qaeda’s most lethal outfit. The group has been waging a deadly insurgency against Somalia’s internationally-backed government.

During the meeting, President Mohamud told senior US Defense officials that Al Shabaab has crippled development in the Horn of Africa and that Somalia would require an international collaborative effort to defeat the group.

Mohamud is expected to meet with US National Security Advisor Jake Sullivan.

In the wake of a deadly hotel siege that claimed the lives of dozens of civilians, Mohamud promised a “total war” to defeat Al Shabaab.

The US State Department has recognized Al Shabaab since March 2008. Its top leaders have been listed as Specially Designated Global Terrorists, and the US has offered bounties of up to $6 million for information that can lead to their capture or death.

According to a critical report from the Pentagon’s Africa Center for Strategic Studies, Al Shabaab has been one of the deadliest and most effective terror groups on the continent this year, accounting for an estimated 36% of all militant Islamist group violence. The group has also been dubbed Africa’s wealthiest terror organization, collecting an estimated $120 million in extortion and other rackets in 2020.

The group has also proved capable of striking the US military.

In January 2020, up to 40 “determined, disciplined and well-sourced” Al Shabab fighters targeted Kenyan and US troops stationed at Camp Simba in Manda Bay, Kenya. The attack killed one US Army Soldier, Specialist Henry J. Mayfield, and two US contract personnel, Bruce Triplett and Dustin Harrison.

A subsequent investigation by U.S. Africa Command called it the deadliest attack on US forces in Africa since October 2017 and destroyed $71.5 million of US equipment, including several aircraft.

For the past two decades, Somalia has been a frontline in the US war on terror and has carried out at least 260 airstrikes and ground raids in Somalia.

Since Biden approved plans to redeploy US troops to Somalia, the US has conducted several airstrikes that targeted Al Shabaab positions in coordination with the Somali government.

While the strikes have been largely successful, conflict observers and activists remained worried about the prospect of civilian casualties. Airwars, a UK-based non-profit that tracks international airstrikes, assessed that one civilian was killed during Biden’s presidency.

Although the Pentagon only admits to killing five civilians and wounding a dozen since 2007, activists claim as many as 3,000 non-combatants may have been killed. Airwars estimates that 78-153 civilians, including 20-23 children, have died in US attacks.

Earlier this year, the Pentagon revealed its new strategy for dealing with civilian casualties. The Department of Defense’s Civilian Harm Mitigation and Response Action Plan, or CHMR-AP, will require military personnel to consider potential civilian harm in any airstrike, ground raid, or other types of combat, as directed by Secretary of Defense Lloyd Austin.

Since 2009, the US has spent more than $2 billion on Somali military security assistance, including arming and training the elite Danab Special Commando Brigade. 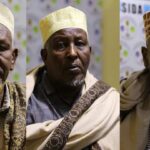 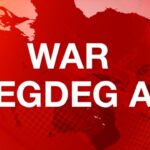 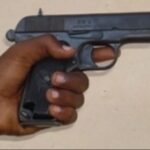